The Adventures of Sir Thomas Browne in the 21st Century

‘A wonderfully erratic, promenading book, in which we see how different, yet how similar we still are today to that most serene, most enigmatic science pioneer and literary master, Sir Thomas Browne, whose prose style is one of the highest peaks in English literature, according to Borges and to my humble self.’ Javier MarÍas

‘Sir Thomas Browne was the great English literary eccentric, but also a true philosopher, driven by curiosity about absolutely everything. One can’t just like or admire him; to read him is to lose oneself in him.’ Sarah Bakewell

‘This is just the kind of celebration Sir Thomas Browne needs and deserves: not a conventional biography but a meditation filled with intellectual curiosity, tolerance, humane observation, and gentle wit.’ Philip Ball

The Adventures of Sir Thomas Browne in the 21st Century is a jeu d’esprit combining science old and new, history and some of the greatest English literature. Through the life of the physician, philosopher and writer Thomas Browne, it is a playful investigation into what we believe and what we search for, taken to the outer boundaries of enquiry, where scientific questioning becomes something else again.

My journey in Browne’s footsteps combines aspects of biography, psychogeography and quixotic scientific experiment. Along the way, we encounter witches and fabulous creatures, zealots and sceptics, those who believe without knowing and those who know without believing.

Browne is unjustly neglected today. Although he is cherished by writers from Virginia Woolf to Jorge Luis Borges, his guttering flame is tended chiefly by academics who perhaps want to keep his treasures to themselves. Yet I believe both Browne’s ideas and his civil manner of presenting them have never been more relevant. I hope to revive Browne for the contemporary reader in the most entertaining way that I can.

Where Browne gently disillusioned the credulous of his day, I reveal some of the ‘vulgar errors’ we still labour under in the twenty-first century, but also pause to ask why those who speak for science today feel they must do so in such strident tones. Where Browne could only marvel at the patterns of nature, I meet researchers who believe they are the key to its secrets. Where Browne looked into himself to reconcile his faith and his science, I wonder what he would have made the Norwich today, the most atheistic city in Britain.

Browne was in many ways a beacon of rationalism and enlightenment, yet he was also a person of his time, as we all inescapably are, and when he was called to give expert testimony at a notorious witch trial, his reasonable words did nothing to help the women accused. This disconcerting episode provides a departure point for an exploration of our much vaunted tolerance and its limits today, as well as my way in to the story of this admirable but flawed figure. 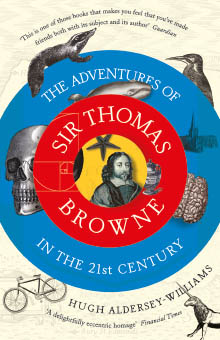 You can buy The Adventures of Sir Thomas Browne in the 21st Century from Wordery, Amazon, Waterstones, or support your local bookshop by ordering from them.